When I first started working out with the Peloton app I thought all weights were created equal. I quickly realized I was wrong and there definitely were good - and bad - dumbbells to use for each class. Here's my experience with different dumbbells and what I've found to be the best ones to use - and ones to completely avoid.

How to Choose What Weight To Use

Peloton makes it easy and will tell you what weights to grab ahead of time for each class. If you miss it in the intro screen, instructors will also mention it in the 1 minute warm up. Generally, you'll want to have a light, medium and heavy set of weights available.

What Classes Use Weights in Peloton?

Currently, classes that use weights are:

My all time favorite weights to use are individual dumbbells with flat bottoms, like these found on Amazon here. I like these because they're easy to switch out during a workout and they're flat so they won't roll around (doing renegade rows with a round dumbbell is no fun!).

The downside to free weights is that they do take up a lot of room, depending on how many sets you get. Amazon does sell racks (and even rack sets with dumbbells like this one) to keep organize, but they can still be a little bulky. 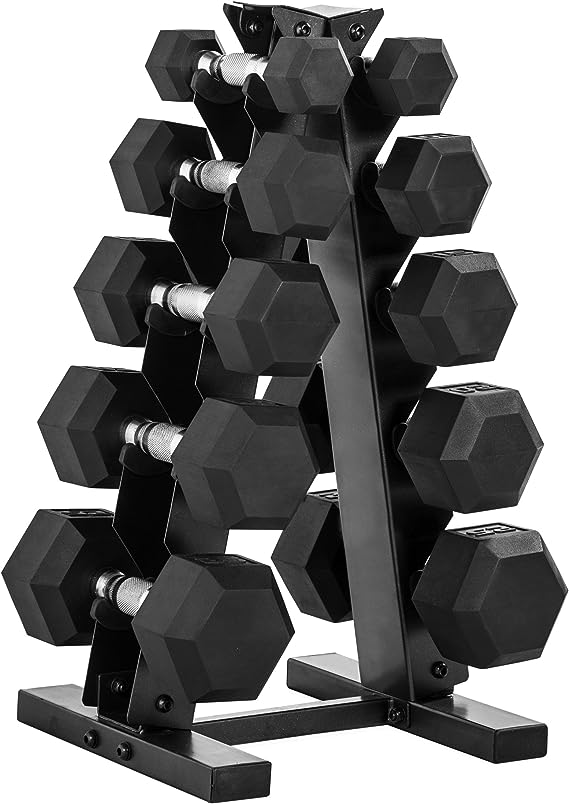 When you order a bike or tread Peloton does give an option to add on dumbbells and those are a great option too. The only downside is during peak times I've heard it can take a while for the dumbbells to arrive.

I really wanted to love adjustable weights because of how compact they were, but ultimately I've found they're a complete pain to use. Currently I use a Bowflex set that goes up to 52 lbs and while it's nice to have the heavy weight option it's makes the weights super bulky and almost awkward to use. I also don't like that they take a few seconds to change weights - which might not seem like a ton of time, but when you're in the middle of a bootcamp or rep set it becomes annoying to have to switch.

Originally I used this smaller pair of adjustable weights and while they weren't as bulky as the Bowflex, it was still annoying spending so much time to change weights in between exercises.

These adjustable dumbbells replace 15 sets of weights. Weights adjust from 5 to 52.5 lbs in 2.5 lb increments up to the first 25 lbs. Easy-to-use selection dials for adjusting weights. Easily switch from one exercise to next and with the turn of a dial you can change your resistance, enabling you to gradually increase your strength.

Where to Buy Weights

My favorite places to buy weights are Amazon, Target and Dick's Sporting Goods. I've also had good luck finding weights at TJ Maxx, but they tend to carry lighter (under 12lb) weights. I've also been surprised to find that retailers like Best Buy also carry dumbbells and are very affordable!

Overall I've found the best type of weights to use with Peloton workouts are regular, old dumbbells. While it's nice to save space with an adjustable set like Bowflex, they tend to be a pain when you have to do a quick transition as well as are super bulky.

for your weekly recipe fix.

Hi, I'm Ali! I'm from Minnesota and love cooking, meal planning and working out (I'm obsessed with my Peloton)! I'm a mom to a toddler and am expecting my 2nd baby in September 2021.

Any cookies that may not be particularly necessary for the website to function and is used specifically to collect user personal data via analytics, ads, other embedded contents are termed as non-necessary cookies. It is mandatory to procure user consent prior to running these cookies on your website.